This is my post on the third chapter of Benny Morris’s book “1948 A History of the First Arab-Israeli War”. I hope to cover each of the other chapters in turn.

This chapter deals with the first part of the civil war or inter-ethnic war which occurred after the UN vote for partition of Israel/Palestine. The 1948 war had two parts, a war between the Yishuv (Jewish community in Palestine) and the Palestinians, which here is called the civil war, which runs from November 30th 1947 to May 14th 1948, and a conventional war between the Yishuv/the newly created state of Israel and the armies from Arab countries from May 15th 1948 to 1949 (fighting more or less ended in January of that year but the war officially ended in July 1949).

The civil war can be further divided into two parts: the first part which is dealt with in this chapter runs from the November 30th 1947 until the end of March 1948. According to Morris it is the Arabs who are on the offensive, carrying out guerrilla attacks and terrorist attacks, which are responded to in kind by the Haganah the Jewish militia which later becomes the IDF/the Israeli army and the two paramilitary/terrorist organizations the IZL and the LHI.

Picture of a hotel in Jerusalem that was bombed by the Palestinians, leveling 4 buildings and killing 58, mostly civilians (Morris qualifies it as the worst attack of the war): 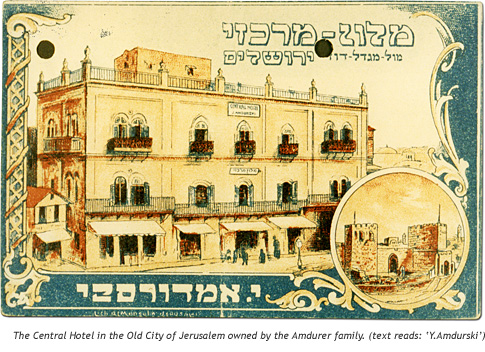 During the civil war British troops are still there but they are in the process of leaving Palestine, they try not to interfere in the fighting while making an effort to maintain law and order where possible.

It is important to note that while the Palestinian population is 1.2 or 1.3 million, and the Yishuv population only 630,000, the Yishuv had a disproportionate number of army-age males as the Zionist leadership had made sure to ship in as many young fit males as possible during the 30s and 40s.

Also the Jewish community was better organized, better trained, better armed and had a real army in the Haganah. The Palestinians had no army of their own, and fought as separate bands or gangs with little central coordination or control. Also the Yishuv was very homogeneous close to 90 percent Ashkenazi and 90 percent secular, while Palestinian Arab society was divided on any number of lines: religious, town/country, etc.

In the aftermath of the holocaust there was much popular US support for Zionism. And Golda Myerson (Meir) managed to raise 50 million dollars in a US fundraising tour in January-March 1948, another 50 million in another tour in May-June. Morris writes that this was used to buy arms from Czechoslovakia and that these arms shipments proved decisive in the battles from April to October 1948.

On the other hand the Arab countries were not as well organized nor as generous, and the Palestinians received a fraction of this foreign aid.

The Yishuv had also set up a clandestine arms industry, which produced guns, bullets, mortars and grenades, all of it hidden from the British.

Also the Yishuv was much more united and had stronger nationalist feelings. While the Palestinian villagers, had ties to family, village and region, rather than to an abstract nation.

Morris describes the various attacks that occurred, most of them in the area destined to form the Jewish state. There were terrorist attacks and attacks on Jewish settlements, which were not very successful because of the Jewish defenses. On the other hand attacks on Jewish convoys of goods were much more successful. It seems from most of the accounts Morris gives that much more Arabs than Jews died in most of the attacks. Of note, is that territory did not change hands, as it would during the later phases of the war.

In any case the fear of defeat as well as the collapse of the Palestinian economy caused many Palestinians to flee their homes. Many of the elite left the country, but most people went to their villages of origin. In all 75,000 to 100,000 Palestinians left their homes in this first part of the civil war. The Palestinian leadership tried to stop this flight, especially for young fighting age males, though sometimes they did encourage the evacuation of women and children.

By the end of this first period there were about 1,000 dead in the Yishuv. Morris does not give a number of Palestinian dead, but it must be higher as at each attack there were more Palestinians killed, though they may have mainly been militants. On the other hand the IZL and LHI paramilitary/terrorist organizations carried out terror attacks during this period. The Haganah did too, but mainly as retaliation.

The next chapter will cover the second stage of the civil war, where the Yishuv takes the initiative, with major battles and the conquest of territory (mainly by the Jews).