First I am against the establishment of an Islamic state, especially one governed by Sharia law in all or part of Palestine.

However I am also tired of hearing people talk about the “destruction of Israel”, when they mean the end of Israel as a state with a Jewish majority.

People advocating the end of apartheid didn’t advocate the destruction of South Africa. Using the term destruction to me is just propaganda.

White South Africans probably warned that they would all be killed if apartheid came to an end, and in their case they were about 10% of the population not about 50% as in the case of Israeli Jews. Was there death and destruction of the 10% of whites by the victorious 90% of blacks and non-whites? No. So I don’t believe that death and destruction are a necessary consequence in this case either.

To be clear I’m not in favor of a one-state solution. I am only saying that it would not necessarily lead to death and destruction. It might, but it might not.

Also to be clear I similarly object to the term genocide being used to refer to what has happened to the Palestinians. To me genocide means the physical destruction of a people. And that hasn’t happened, not yet at least. 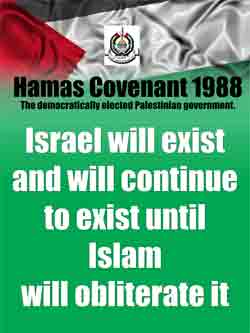 Now on to the Hamas charter. Here is a link to an English translation of the Hamas Covenant of 1988

I will consider two points that are often brought up:

1. that the charter advocates the destruction of the Jews living in Israel/Palestine

I believe the following passage from article 7 is adduced as evidence of the first point:

The Prophet, Allah bless him and grant him salvation, has said:

“The Day of Judgement will not come about until Moslems fight the Jews (killing the Jews), when the Jew will hide behind stones and trees. The stones and trees will say O Moslems, O Abdulla, there is a Jew behind me, come and kill him. Only the Gharkad tree, (evidently a certain kind of tree) would not do that because it is one of the trees of the Jews.” (related by al-Bukhari and Moslem).

This is clearly a disgusting religious passage, the sort of thing one may find in many religious books, such as certain genocidal exhortations in the Old Testament.

But this may be contrasted with another quote from article 31:

F. Followers of Other Religions: The Islamic Resistance Movement Is A Humanistic Movement:

The Islamic Resistance Movement is a humanistic movement. It takes care of human rights and is guided by Islamic tolerance when dealing with the followers of other religions. It does not antagonize anyone of them except if it is antagonized by it or stands in its way to hamper its moves and waste its efforts.

So it is not clear what the real intent is. Is it the former statement of war and killing Jews, or is it this statement of some sort of coexistence under Islamic rule.

In any case this quote seems to advocate an Islamic state in Palestine. Indeed the following quote from article eleven makes it clear that Palestine is to be a Muslim state governed by Sharia law:

This is the law governing the land of Palestine in the Islamic Sharia (law) and the same goes for any land the Moslems have conquered by force, because during the times of (Islamic) conquests, the Moslems consecrated these lands to Moslem generations till the Day of Judgement.

In any case I am in no way shape or form in favor of an Islamic state, whether based on Sharia law or not. And I think this is a big issue one should have with the charter. Though it is brought up less often than the other two points.

Finally the preamble to the charter gives the following quote:

Israel will exist and will continue to exist until Islam will obliterate it, just as it obliterated others before it” (The Martyr, Imam Hassan al-Banna, of blessed memory).

To me the term obliterate here does suggest physical destruction.

Although others have translated it as:

Israel will be established and will stay established
until Islam nullifies it as it nullified what was
before it.
The Martyred Imam Hasan al-Banna
(may Allah have mercy upon him)

Which doesn’t have the same connotation. I don’t know if this is a deceptive translation or not. Oddly enough the original Arabic version is difficult to find. Which may suggest that the claim that it is a historical relic (below) and not relevant may be true. Most totalitarian movements make it a point to publish their propaganda platform widely.

Now having considered this I’ll state that current Hamas leaders have said that if there was a two-state solution along the 1967 borders with the Palestinian capital in East Jerusalem, they would hold a referendum for the Palestinians to decide whether to continue their struggle or not.

This can be seen in the following two interviews:
at around 4:20 in
Charlie Rose with Hamas leader Khaled Meshaal May 2010

at around 20:00 in:
Charlie Rose An exclusive interview with Khaled Meshaal, the political leader of Hamas July 2014

Finally Meshaal has said that the charter “is a piece of history and no longer relevant, but cannot be changed for internal reasons”. here

Update: As a reader has pointed out Hamas dropped the call for the destruction of Israel from their program (this was in their manifesto/platform for the 2006 elections), and now wants a state based on the 1967 borders as given above, but they are still not willing to recognize Israel’s right to exist.