Looking at my traffic it seems a lot of people come here looking for picture while searching for “Where is Gaza?”. So here are some pictures to explain where Israel and Gaza are located with respect to the rest of the world (as well as where the West Bank is located, which is the other half of the Palestinian territories).

For a great picture of just Israel, Gaza and the West bank see the map in this previous post.

Here’s a picture of the whole world with a little red circle around Israel: 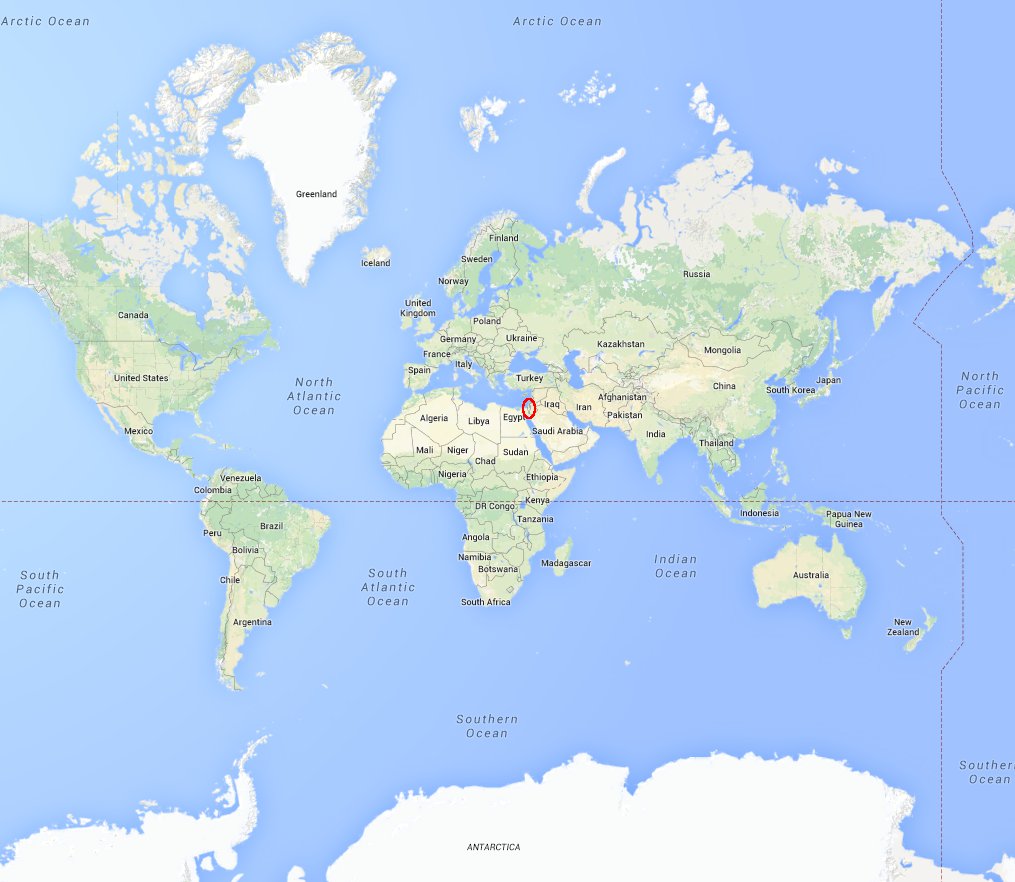 Here’s a picture of Europe and Asia with a red circle around Israel: 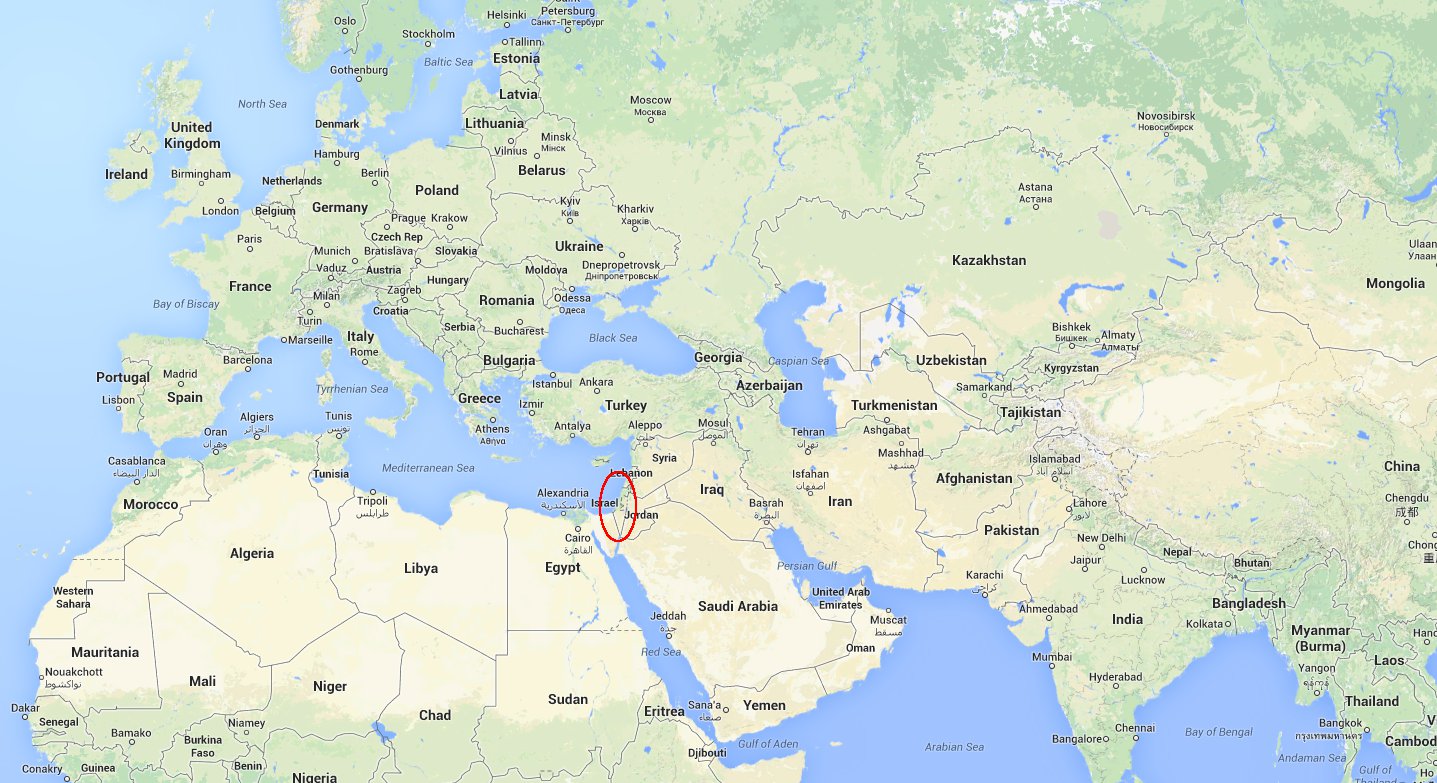 Here’s a picture of the greater Middle East with a red circle around Israel and finally at this scale I can draw a blue circle around Gaza: 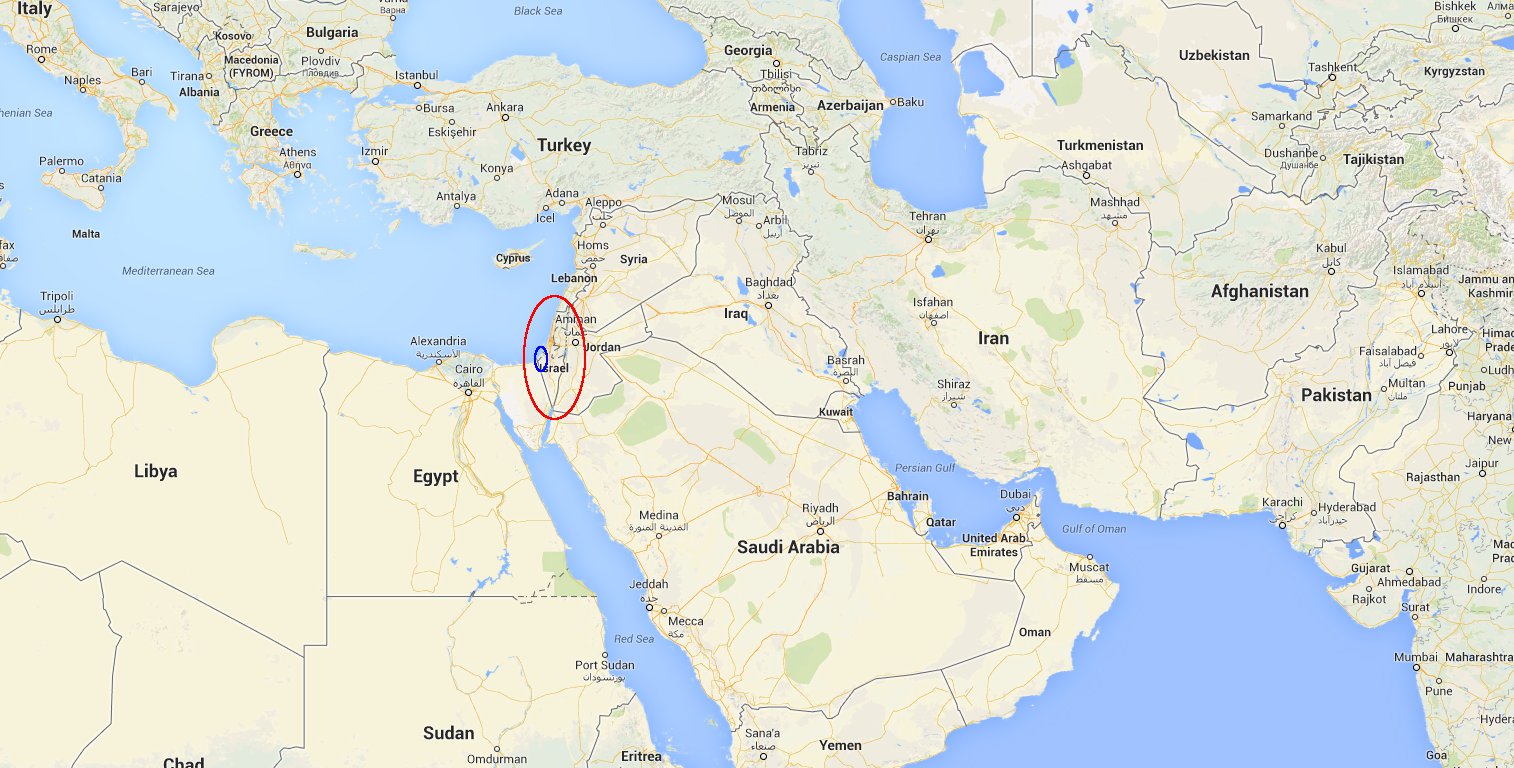 Here’s a picture of Israel (red) and Gaza (blue) and their immediate neighbors (Egypt to the South-West, Lebabnon and Syria to the North-East, and Jordan to the East, Mediterranean to the West, and part of Saudi Arabia past Jordan), the West Bank where the rest of the Palestinian territories are located is circled in Green: 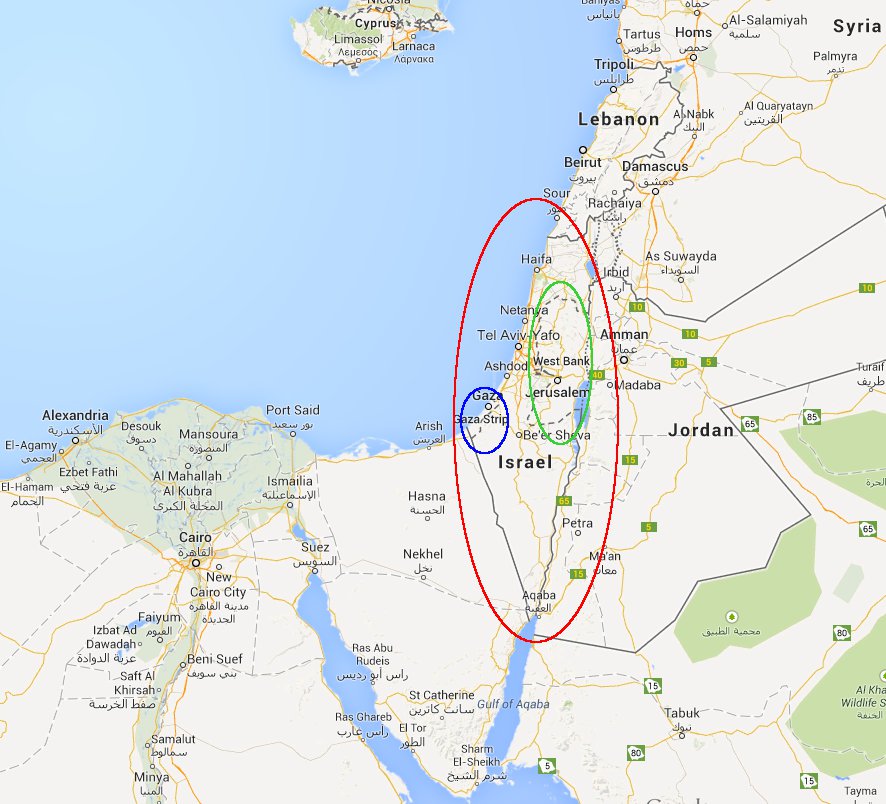 And finally here’s a picture of Israel with Gaza circled in blue and the West Bank in green (also in case it is not clear, all the area to the East of the Dead Sea is in Jordan, Amman being its capital):

Based on feedback from Facebook, I’ve realized that an important issue that needs to be examined is the status of the settlements in the West Bank. Specifically where they are located, which ones Israel is willing to evacuate and which ones Israel plans to keep.

The following map answers all three of these questions: 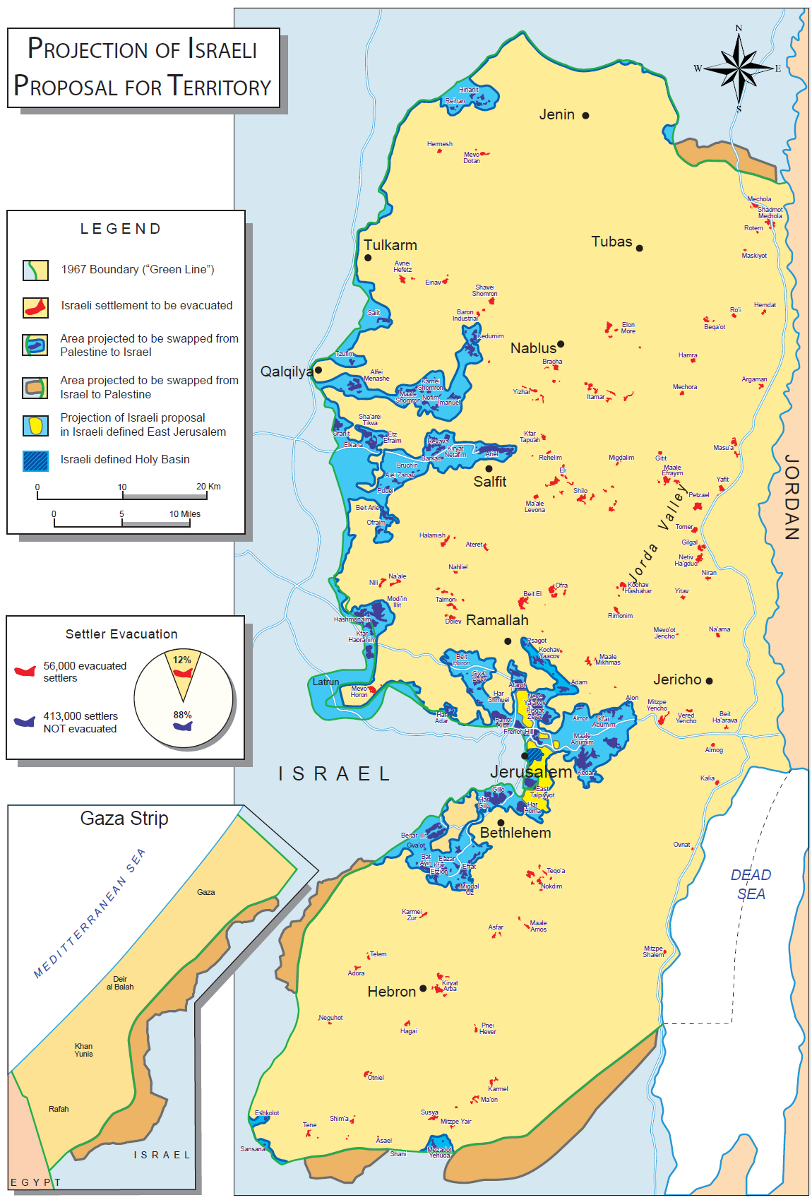 It is a map of a proposal that was made by the Israeli PM (Ehud Olmert) to Palestinian leader Abbas Mahmoud Abbas in August 2008.

The red areas are the settlements Israel would evacuate (12% of the settlers, 56,000 people). And the dark beige areas behind the green lines are the unused land in Israel that the Palestinians would get in exchange for the blue areas Israel would annex (the equivalent of 5.5% of the West Bank).

Here’s a close of view of the Greater Jerusalem area. 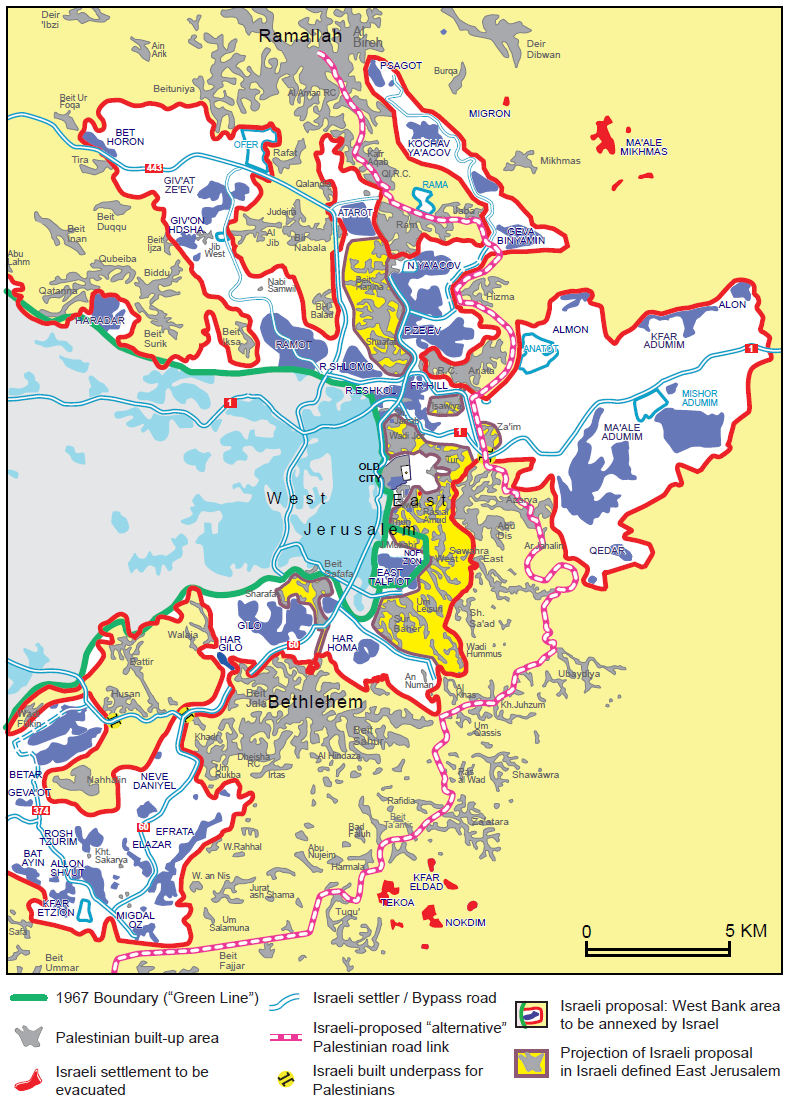 While not explained in the legend the red line is the separation wall. Note East Jerusalem is on the other side of the wall, as is an area to the west of Bethlehem. In light purple is a proposal for a road that links Bethlehem to Ramallah (bypassing East Jerusalem).

There would also be a road from the West Bank to Gaza but it would be under Israeli sovereignty. 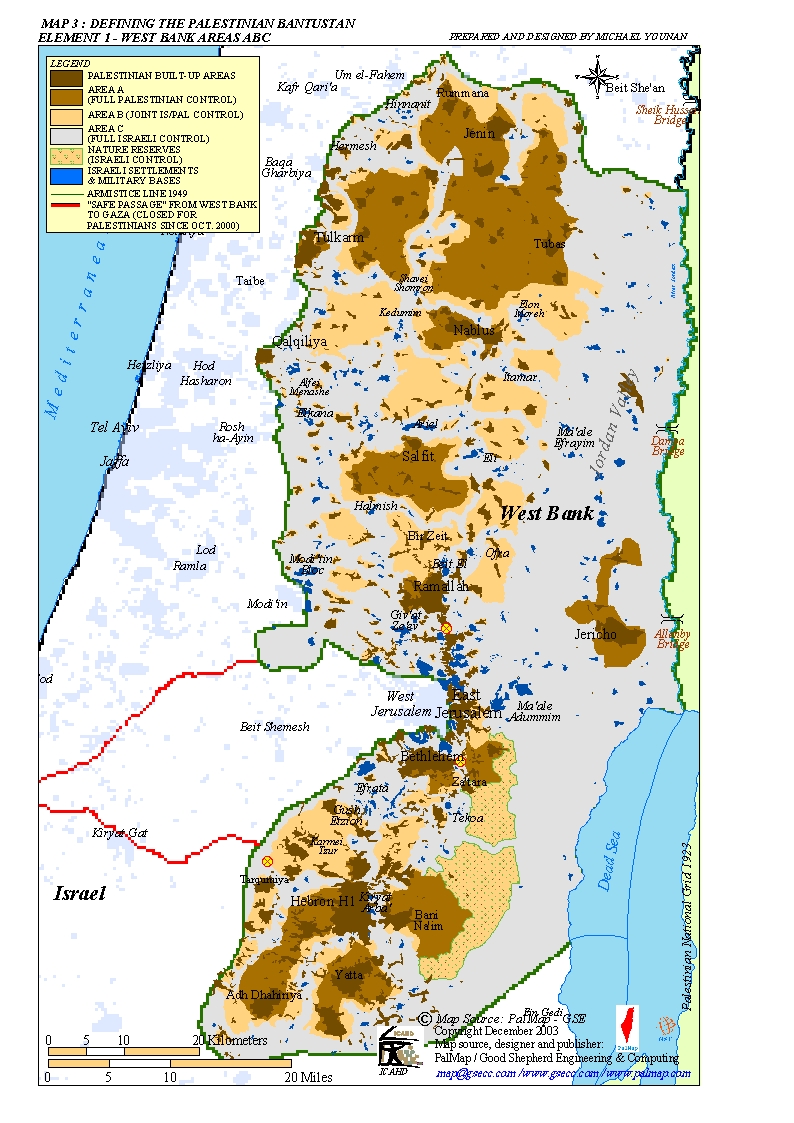 Again settlements in blue in the above image.

Here’s another similar map but with the barrier wall in red and the 1967 borders in green. 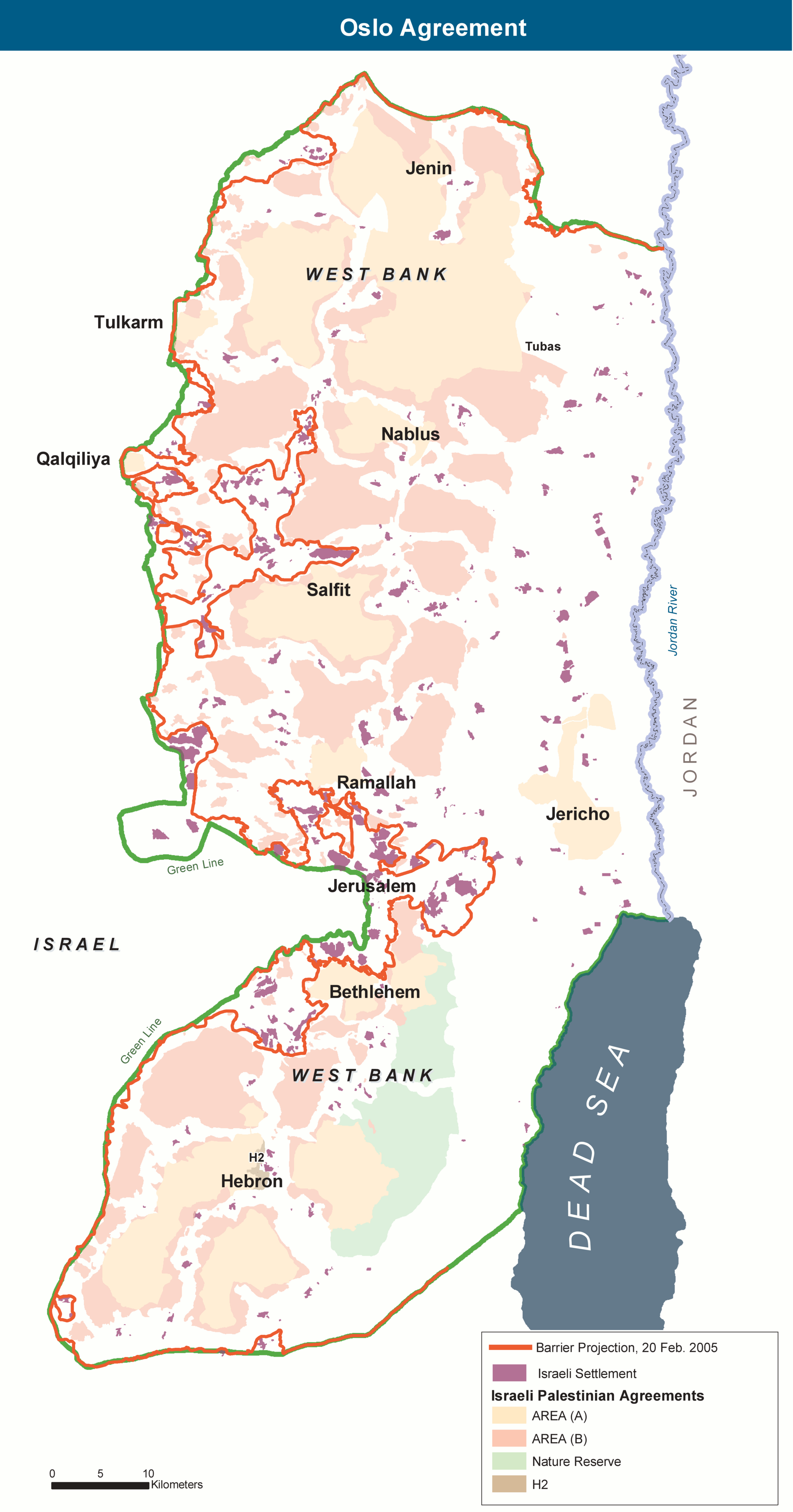 Let me know if you have any questions!